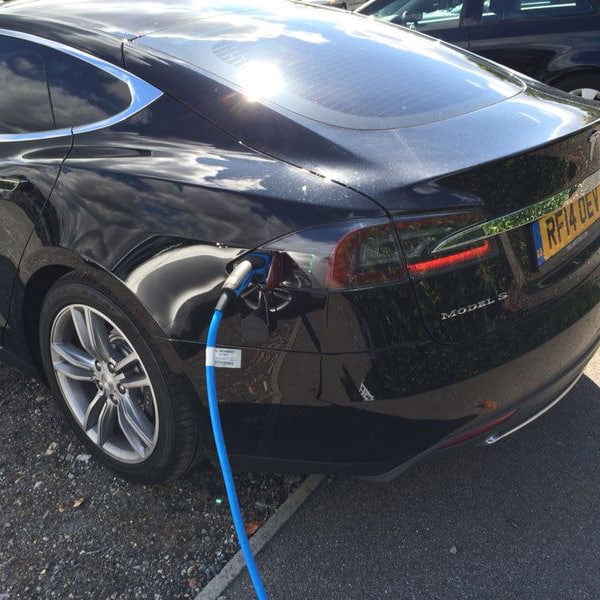 Over the years, technology has advanced and now Hybrid vehicles are common place and encouraged for use in major cities. Going all electric is the obvious next step, but for professional drivers like Chauffeurs, this transition doesn’t feel natural and range anxiety is a major hurdle to overcome.

With the launch of the Tesla Model S came a major break through. A promise of around 300 miles between charges, which is more than adequate for most city Chauffeurs. Add to that a super quick charge time that can bring your vehicle from almost empty to the recommended 80% charge in about an hour and a half, and you have the perfect eco machine. 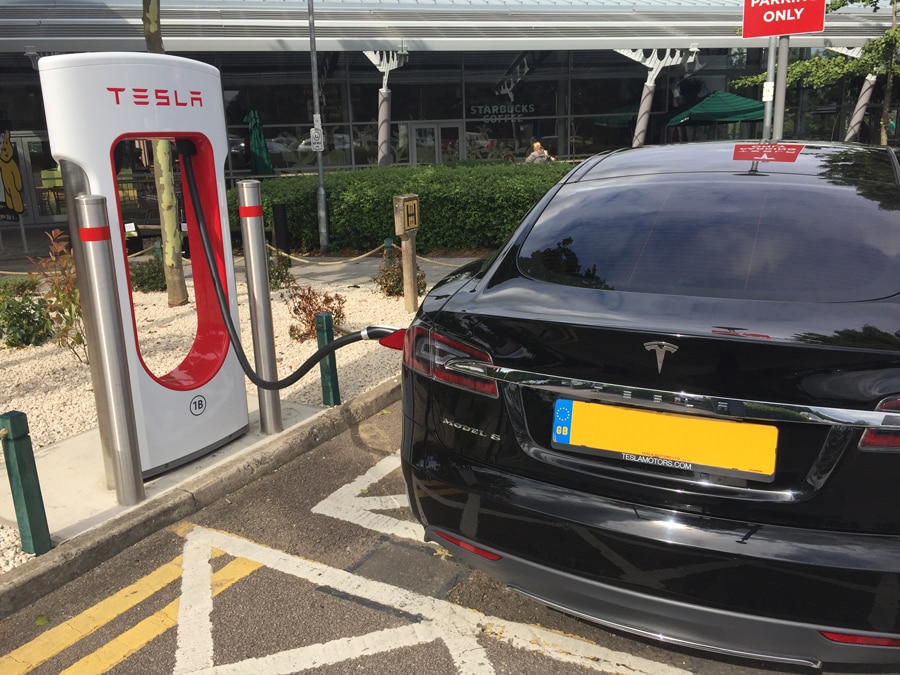 With these facts on the table and a couple of thrilling test drives with the Tesla Team at Westfield, London behind us, we decided to add our first Model S to the fleet. But how does running and using Model S as a Chauffeur compare to the more ‘conventional’ options like Mercedes, Audi and BMW?

It’s now been more than a year since our first black eco goddess rolled silently through the gates and settled into position as queen of our Eco Fleet. Initial interest was very high, with lots of enquiries from Chauffeurs looking to hire, though possibly secretly more interested in taking her for a spin. Convincing them that the Tesla was a viable proposition for a professional driver was another matter.

The best way for us to prove the Tesla’s worth and validate all the claims for its use as the ideal Chauffeur Vehicle, was to make it available to our sister company Location Chauffeurs Ltd, for chauffeur driven work. So that’s just what we did.

Tesla Model S on the road

Range anxiety was and to this day is a big issue for people. Quick charge times, even just for the occasional top up, are only achieved using the Tesla Super Chargers or the CHAdeMO adaptor, but I’ll come to that later. Of course you can recharge using any of the electric charge points around town, but they’ll deliver energy at slower rate and so for some, that can be an issue. The loss of the Super Charger at the Churchill Hotel in Portland Square has caused quite a disruption to our inner London routine. We never actually needed to do a full recharge there, but in the early days of chauffeuring the Model S, there was some reassurance of topping up whenever an opportunity arose.

Initially, using non Tesla charge points proved to be a bit hit and miss. If you didn’t get the sequence of connecting the vehicle to the charge point just right, then no charging would take place. Typically, other drivers would come over and ask you questions about this ‘strange new car’ you were driving, which would delay you getting the lead plugged in and the charge point would time out. You’d think everything was fine yet when you returned to your vehicle, not an ounce of recharge had made its way into your battery.

There was never an issue using Tesla’s own charge points though. Thankfully, they are working on introducing more charge points and a quick look at their website shows a promising view for their forecast of new charging stations, both in the UK and across Europe. Happy days.

A bonus for us and our regular rental clients are the new Tesla Chargers recently installed at South Mimms services. They, along with the other regular charge points, are getting busier now as more people are switching to all electric vehicles. Hopefully we will continue to see more appearing everywhere we go.

To further alleviate any possible range anxiety, we invested in a CHAdeMO adaptor. A what I hear you say! Well, without getting too techy here, most of the smaller charge points are AC powered. To take advantage of the higher output chargers like the DC powered Nissan charge points, you need one of these adaptors. You can then get closer to the Tesla Super Charger top up times.

I’m relieved to say that a full charge has proved to be more than adequate for a days Chauffeuring, even when a few extra jobs get slipped in the schedule. An extra airport transfer or a sudden change of plans by the client requiring a trip out of town – not a problem. We’ve pushed the limits a few times by purposely not recharging each day and dropped the battery right down to reserve. But, we’ve always found sanctuary at a charge point in the end.

In the past 12 months a few things have gone wrong, fallen off or got stuck. Nothing has ever left us stranded though and the service from Tesla has always been good.

For those not yet familiar with a Tesla, it has automatic door handles. When you approach the vehicle with the remote on you, the flush fitting door handles ‘present’ themselves. A little motor politely drives the handle a couple of inches outwards, allowing you to gain entry. When the car moves off or you lock it, the handles tuck themselves neatly away again. On a couple of occasions we have had individual handles that refuse to budge. Either they won’t present or they remain sticking out. On one other occasion, an internal door handle malfunctioned simulating a child lock experience for the rear passenger.

The roof of the vehicle has little ports for connecting a roof rack if required. These are hidden by equally little spring loaded plastic flaps. Whilst they look fine, they have a tendency to take flight at motorway speeds. We’ve lost a few now that were there at the start of a journey and gone by the time we arrived. They are easy enough to replace, but it’s a bit annoying.

The rubber trim around the rear door aperture has a tendency to come adrift. It is easy enough to put back, but a car in this price bracket shouldn’t really have things coming adrift or dropping off regularly.

One one occasion the roof decided to leak and water started to drip through the off side rear head lining. Again it was remedied with a visit to the Tesla service centre. It was apparently a blockage somewhere, though this time they didn’t do such a good job of cleaning up and we had to have the headlining cleaned afterwards.

The tyres have been amazing. As well as giving a great ride and tremendous grip, they’ve lasted well. Covering over 20,000 miles so far and still with just over 4mm of tread to go. There is still some difficulty in obtaining the right tyres though. The Model S comes with just a couple of tyre options when they’re new and when we tried to obtain a replacement, they were only available directly from Tesla themselves. Hopefully this will improve as time goes on.

One minor thing that bugged us was the replacement external door mirror cover. It is of course great that you can purchase just a cover without having to by the complete assembly, but they are only available in primer. Many manufacturers now offer popular colour coded items pre painted, especially when there is such a small colour range to choose from.

Probably the biggest benefit of driving a Tesla in the city, is not necessarily appreciated by the driver but by those behind. Because of its lack of emissions, there are no nasty odours drawn into your cabin. On a couple of occasions we’ve found ourselves sitting behind another Tesla in the all to familiar London traffic and the absence of exhaust fumes was very welcome.
Model S from a chauffeur driven clients point of view

Generally, the Tesla has been received well by chauffeur driven clients. Some really love it, especially from its eco carbon footprint point of view. Others just love that it’s completely different and eerily quiet.

A few clients have suggested the ride in the back is a little hard and I’d have to agree. The seat swabs are not as sumptuous as you would find in an S Class Mercedes or BMW 7 Series for example.

The ‘Frunk’ or bonnet to you and I, offers additional storage space, so it makes the Tesla great at transporting passengers with lots of luggage. Combine this with the already spacious boot area and you’ll get far more bags in here than you would in a regular prestige saloon. The Frunk does require a certain level of care when closing though. Press it too hard or vigorously in the wrong place an you’ll easily dent it.

Is the Tesla an ideal Chauffeurs car?

So the big question is whether after a year of chauffeuring in a Model S, is it a good choice?

The hardest thing for professional drivers to overcome, is the inability to refill the fuel tank in just a few minutes almost anywhere they go. The reality is that with a little forethought, it’s rarely necessary to have to refuel your vehicle during the working day. Add to this the fact that when to do need to ‘top up your tank’ it’s free, then it becomes a no brainer.

This is progress and with any form of progress comes a requirement to learn new things and revise the way we think. We could look at the Tesla and other electric vehicles as a move to save the planet from the waste of fossil fuels and distance ourselves from the scandal of emission treachery. We could look at it as a fantastic way to reduce our mileage costs and improve profitability. We could also suggest we are the pioneers, leading the way and setting an example to others. And there will be lots of other arguments from both sides, but only when we combine all of them do we truly get what this is all about.

It’s not going to be the right choice for everyone, but it is definitely a viable option for many who would have initially rejected it.